Read Issue 55 of Digital Art LiveHasraf Dulull on creating the sci-fi film Battlesuit, made using the Unreal Engine on a laptop 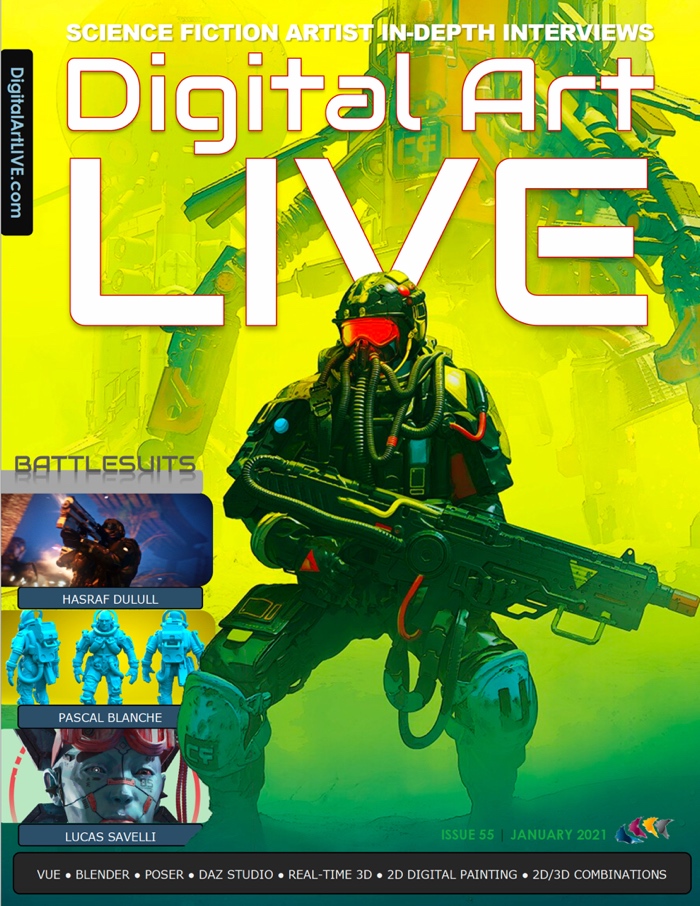 Subscribe now and receive the PDF for FREE every month 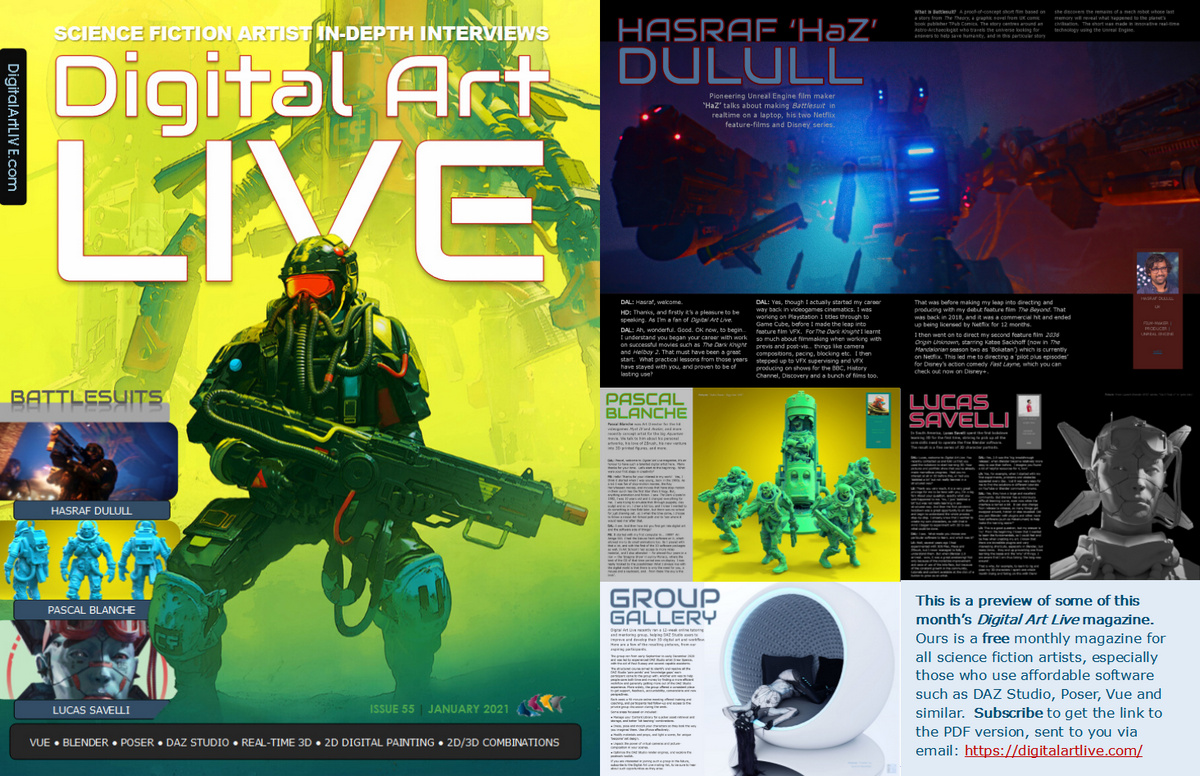 Welcome to the first issue of 2021. Let’s take an optimistic look at what’s coming in 2021. Of course there are way too many things to mention, but here are a few!

Firstly, many readers will be anticipating the arrival of an affordable new PC in the next few weeks, a PC brimming with power barely imaginable a decade ago. Here in the UK, £1,100 inc. tax gets you a workstation-like studio build, with an 8-core Ryzen 5 5600X CPU and a worthy RTX 2060 graphics card. Pundits have sometimes mused that the price-power ratio on PCs has stalled forever, but such stalls are only temporary. And as the current PC components drought ends, perhaps by summer 2021, hobbyists who can only buy a new PC at £599 should also see better specs for the same price. As for graphics cards, who can say? We’re promised a $399 8GB RTX 3060 Ti, but will they arrive at that price and in volume? Let’s hope so. Elsewhere, the ‘draw on the screen’ pen-monitors are being delivered by the truck-load….

Read the full editorial in issue 55

Hasraf talks about his pioneering sci-fi short film Battlesuit, made using the real-time Unreal Engine on a laptop.

“… we were getting reflections, shadows and lighting at such a cinematic level [all while] scrubbing back and forth in the Unreal Engine with explosions going off, spaceships flying, robots firing weapons as I was moving my camera around—all in real-time!”

Pascal was Art Director for the videogames Myst IV and Avatar, and more recently concept artist for the big Aquaman movie.

“My personal projects … they are a bit like ‘my personal room’. When the job of the day is done, it is relaxing to play with these personal projects. I finally jumped [into 3D printing] … It is really rewarding to see your digital creations becoming real physical objects!

“… the first lockdown was a great opportunity to begin to understand the 3D process step-by-step. I knew I wanted to create my own characters, so I began to experiment … to learn to rig and pose my 3D characters I spent one whole month trying and failing on this with them!”

DAL: Hasraf, welcome.
HD: Thanks, and firstly it’s a pleasure to be speaking. As I’m a fan of Digital Art Live.
DAL: Ah, wonderful. Good. OK now, to begin… I understand you began your career with work on successful movies such as The Dark Knight and Hellboy 2. That must have been a great start. What practical lessons from those years have stayed with you, and proven to be of lasting use?
DAL: Yes, though I actually started my career way back in videogames cinematics. I was working on Playstation 1 titles through to Game Cube, before I made the leap into feature film VFX. For The Dark Knight I learnt so much about filmmaking when working with previs and post-vis… things like camera compositions, pacing, blocking etc. I then stepped up to VFX supervising and VFX producing on shows for the BBC, History Channel, Discovery and a bunch of films too. That was before making my leap into directing and producing with my debut feature film The Beyond. That was back in 2018, and it was a commercial hit and ended up being licensed by Netflix for 12 months.
I then went on to direct my second feature film 2036 Origin Unknown, starring Katee Sackhoff (now in The Mandalorian season two as ‘Bokatan’) which is currently on Netflix. This led me to directing a ‘pilot plus episodes’ for Disney’s action comedy Fast Layne, which you can check out now on Disney+.
DAL: Thanks, that sounds like quite a ride! But now let’s turn to Battlesuit. What attracted you to the project?
HD: Neil Gibson, who is also the creator of the graphic novel, reached out to me last year, October, for a general coffee chat. He was a fan of my work and wanted advice about moving the book into film and TV. After our coffee-chat he gave me some graphic novels as a gift, one of them that will probably be right up my street called The Theory. I read it and there was one story which stood out for me “Battlesuit”. We then caught up again and he mentioned that they are looking at creating proof-of-concepts for some of their IP being developed for TV. ‘Was I was interested in directing?’ I said ‘how about “Battlesuit”?!’ Originally it was planned for a live action proof-of-concept, but due to budget and schedule constraints we knew there was no way we would be able to do the vision justice. Plus, I really wanted to stay true to the story, so I went away to rethink how I would pull it off. That was around the time when Netflix was putting out a lot of projects like Love, Death and Robots, Castlevania etc. So there was a huge rise in that market. I then went back to them with a pitch, to do it in animation.
DAL: I see. Nice timing. How closely did you then work with Neil on the film, during the production? You were working from his book Theory, and as you say you wanted to respect the story, but also having to adapt it for a short film. Was he helping guide the process and advising on how to condense if needed, or was the whole process carefully planned and storyboarded before production?
HD: I worked closely with Neil from the script stage right through to editing stage. Neil is very collaborative as a writer, and was very respectful on the vision which I had to take his graphic novel to the screen. We first worked to get the graphic novel story into an actual screenplay, this was probably one of the biggest tasks, because a single panel in a graphic novel could equate to like three shots in a film!
There wasn’t really a storyboard needed, because I took a ‘Zack Syder approach’ (300, Watchmen) and used the graphic novel as a good guide. But also — since I had a hands on previs experience + we were using Unreal Engine — I was able to block out shots very quickly and get a first-pass edit out for review and discussion.

This website uses cookies to improve your experience while you navigate through the website. Out of these, the cookies that are categorized as necessary are stored on your browser as they are essential for the working of basic functionalities of the website. We also use third-party cookies that help us analyze and understand how you use this website. These cookies will be stored in your browser only with your consent. You also have the option to opt-out of these cookies. But opting out of some of these cookies may affect your browsing experience.
Necessary Always Enabled
Necessary cookies are absolutely essential for the website to function properly. This category only includes cookies that ensures basic functionalities and security features of the website. These cookies do not store any personal information.
Non-necessary
Any cookies that may not be particularly necessary for the website to function and is used specifically to collect user personal data via analytics, ads, other embedded contents are termed as non-necessary cookies. It is mandatory to procure user consent prior to running these cookies on your website.
SAVE & ACCEPT